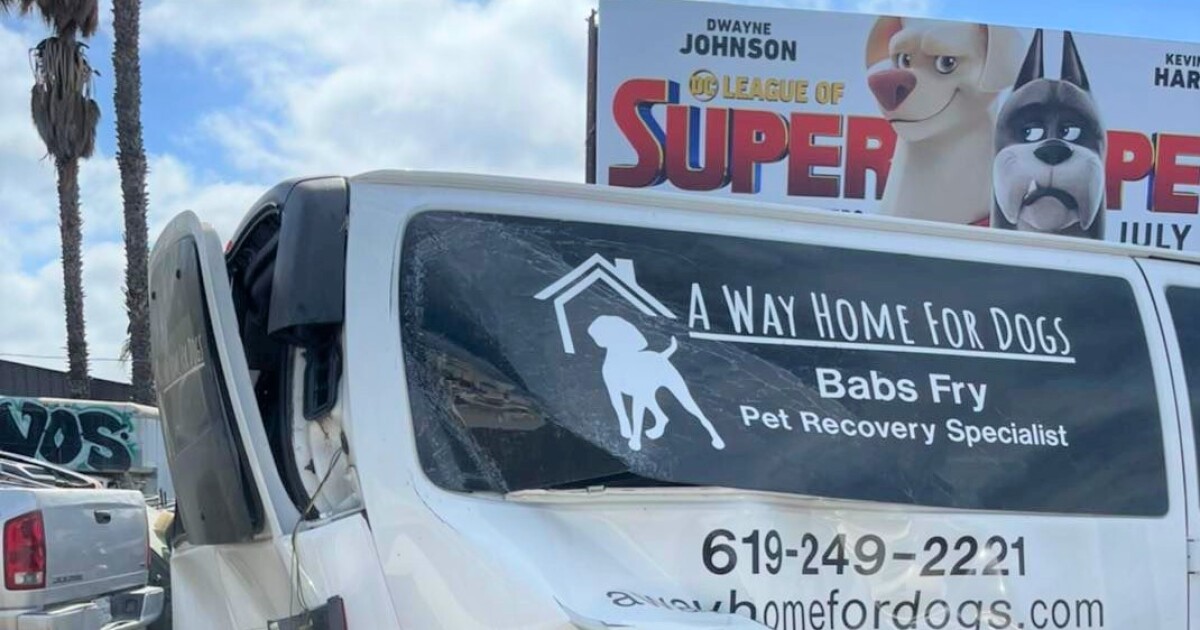 As darkness fell across I-805 near the Palm Avenue exit, Babs Fry scanned the shadows to see if one could be the runaway black lab that had been spotted earlier near the freeway.

She had left a humane trap baited with a rotisserie chicken to tempt the pooch, who had disappeared nine nights earlier during a Fourth of July fireworks celebration.

Suddenly, she heard an explosion that smacked her face hard into the steering wheel of her canine rescue van, wrenched her right arm and may have briefly knocked her out.

Dazed, Fry surveyed the wreckage of her customized 2015 van in which she patrolled freeways and scanned hillsides in search of missing and stray dogs.

It’s a free service she has been performing for eight years — a passion ignited by the kindness of a stranger, a professional dog tracker who helped Fry after a pregnant terrier mix Fry was fostering had disappeared.

She spends about 80 hours a week crisscrossing the county in her “A Way Home for Dogs” van catching wayward canines and delivering them to owners, foster homes and kennels on her Jamul ranch, as well as advising pet owners on tracking and recovery.

Calls come in from across the country asking for advice. “My phone rings 24/7,” says Fry, who estimates she gets 10 to 30 queries a day.

But, on the evening of July 13, her van was totaled. Luckily no animals were on board.

The Honda Civic that hit the van was a crumpled ball of metal. “It was the most gut-wrenching experience of my life,” she says. “I went back to try to find the driver. I was sure he was dead.”

But his car was empty. The driver had escaped with minor injuries.

That was one of a trifecta of troubles, beginning with an injury from a rescued dog in December, that prompted the fiercely independent do-gooder to reach out to others for help.

Her Chevy 3500 converted 15-passenger van — Rhino-lined and custom-fit with shelving for traps, carriers and equipment — had logged 132,000 miles. Its value, in the world of post-pandemic auto prices, was far lower than anything similar available today to replace it.

The collision insurance of the motorist who collided with her capped out at $10,000. Plus, there was no insurance for a rental vehicle, so Fry is paying $1,300 a week to rent a van to continue rescuing dogs.

Amid this chaos, Fry was summoned to the San Diego Police Department to pick up her personal items. To her shock from her, she was handed an envelope containing her license from her bearing someone else’s photo.

Turns out, the photocopied license had been recovered from an abandoned vehicle in a separate case. Her identity from her had been stolen, launching her on a separate mission to check on and repair any damage to her credit from her.

Instead of starting a GoFundMe campaign, her friends reached out for support on the AWayHomeForDogs.com website and Facebook page (Facebook.com/AWayHomeForDogs) where donations are tax deductible, and there is no fee.

As of late this week, more than $25,000 have been raised which, with insurance reimbursement, falls short of the $60,000 cost of a truly functional van for dog rescue work, Fry says. Her dream vehicle is a Ford Transit passenger van with a high roof.

Meanwhile, she continues her rescue missions. “I try to walk through and away from every life experience seeing the positive on the other side, learning the lessons along the way,” she posted on Facebook.

The night of the accident, her first call wasn’t to her husband, Derek, who works in Texas, or to her parents, or to a friend who could pick her up. It was to ask a volunteer to come watch the trap and keep an eye out for the black lab, Toto.

The dog took the bait and was in the cage by 8 am Mission accomplished. Fry then concentrated on uniting Toto with his family from him.

When I talked to her Wednesday, she was waiting at home for Stephanie Sauerberg who was driving here from Reno. Her husband de ella, a truck driver, had just made a delivery in San Diego when their dog, who rides a shotgun, jumped out of his truck to chase something at 3 am last Sunday.

One of Sauerberg’s online “lost dog” posts was spotted by Fry who called and offered to help.

“She’s amazing,” Sauerberg says. “She She she did n’t know us. We were not part of her city, yet she was ready to help us find him. We were devastated.

“I don’t think we would ever have found him if not for her.”

In a strange way, saving the lives of dogs has helped Fry save her own life. In October, she will celebrate 15 years of being sober. “I’m very transparent about my recovery,” she says. “I believe this work keeps me clean and sober and spiritually grounded.”

When she attended her Alcoholics Anonymous meeting shortly after the crash, the topic centered on asking for help.

“I’m not good at asking for help — never have been — it took a lot of coaching from others to start asking,” Fry admits. “My sponsor said, ‘Babs, you’re not asking for money for you, you’re asking for people to support the dogs.’”

Her sponsor’s counsel helped her work up the courage to post her story on Facebook. “People don’t know that I need help,” says the diehard volunteer, who has been underwriting her trapping supplies, field cameras, dog food and training, vet bills, gas and van upkeep and maintenance for years.

When Fry was hospitalized for a few days in December, volunteer Suzi Molinari stepped in to help feed, clean, groom and walk the kenneled strays and care for the horses and other animals on Fry’s ranch.

“There is nothing I would not do for that woman,” Molinari says. “She just has a heart of gold and she tries so hard. I love the passion she has for animals. … Babs is one of those people who doesn’t say no.”