Feast on Colombian hot dogs and tray paisa at Selva 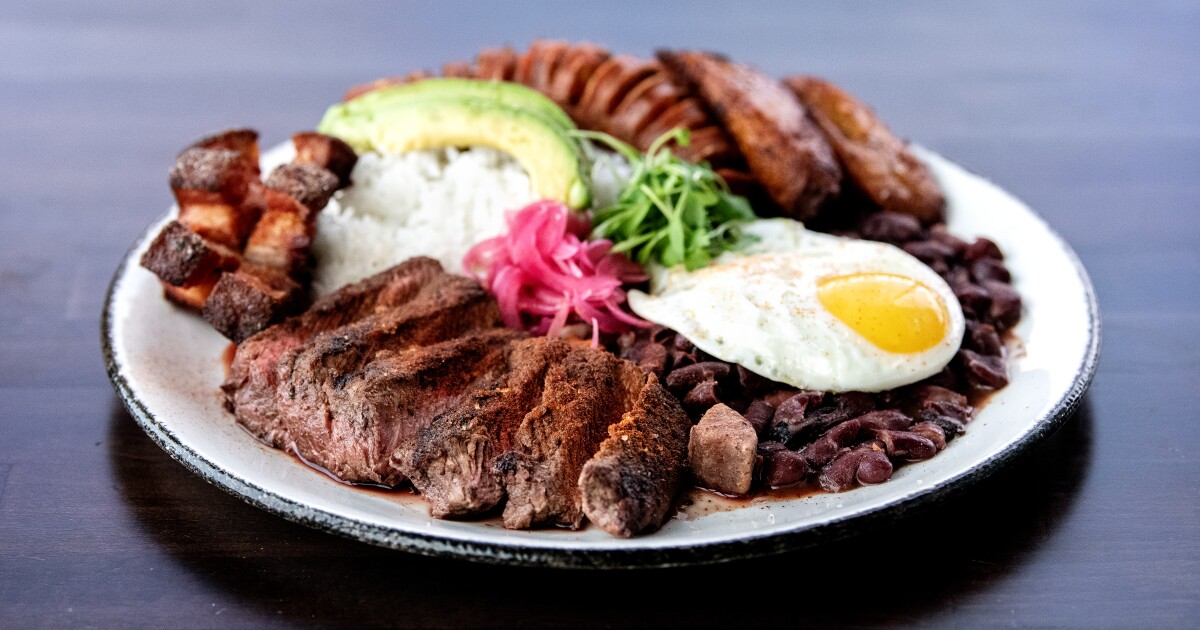 Whenever Long Beach chef Carlos Jurado visits Colombia, where he was born, he winds up feeling pulled to the hot dog stands set up along well-trafficked streets in cities across the country.

Over the last century, culinary cultures across South America have adapted the hot dog and made it their own. Its form is infinitely customizable to regional tastes.

As with the Chilean complete Italiano — a national favorite in which the frank disappears underneath flag-like stripes of chopped tomato, mashed avocado and rivers of mayo — Colombians tend to enjoy their hot dogs, called super-perros, with toppings as layered as geological strata. Jurado recalls them smothered in chopped bacon, Cheetos, onions and several sauces overlapping in squeeze-bottle squiggles. Crushed pineapple and fried quail eggs are frequent grace notes.

At first glance, the shape of the super-perro Jurado constructs at his 4-month-old restaurant Selva in Long Beach calls to mind an enormous mouth stuffed with potato chips. I don’t mean for that to sound unappetizing. In its rollicking excess, it’s a sight that fairly dares you to bite back.

Jurado swaps in a tapered bolillo roll for the usual oblong bun. A link of taut, paprika-stained Colombian chorizo ​​peeks out from underneath a topsoil of crumbled cotija, charred onions and peppers, jalapeño jam, aioli mixed with salsa verde (a mulchy, punchy Colombian version called ají) and finally, the smashed Lay’s chips dusted with chili powder.

This is, as you might imagine, a two-handed, face-planting commitment to polish off. The joyride of whirling textures and outsize flavors merits the small pile of napkins you’ll need later.

The hot dog is a staple among the restaurant’s weekend brunch items; at dinner, it can be requested as an off-the-menu special you have to know to ask for. It probably should stay that way. Eye-candy dishes, especially when they deliver beyond their visual pop as this one does, have a way of overrunning a kitchen with their popularity — and Selva has plenty of other exemplars of Colombian cuisine that are equally worth ordering.

This is Jurado’s first restaurant, although he’s a veteran of Los Angeles restaurants, including stints at Border Grill, Vespertine and the now-closed Red Medicine and Bouchon in Beverly Hills. In the last few years, he’d drifted toward restaurant consulting and recipe development. The change brought less stress and more time to focus on being a father.

He might have stayed on that path if he hadn’t received a call from restaurateurs Geoff and Karna Rau. He’d communicated with the couple before about other possible projects, but they’d recently closed the Hideaway, their Long Beach steakhouse, and they wondered whether he might like to see the building.

Jurado had occasionally held elaborate pop-up tasting-menu dinners, often centered on smoked meats. Hideaway’s 85-seat space, divided into a sedate dining room and a bar area with a view into the kitchen, felt like a place of possibility. Not for the fancy concoctions like smoked beef with fried wild rice and chlorophyll oil he’d tinkered with at the one-off meals but more for the straightforward cooking he’d come to love growing up.

His parents had relocated from Cali, Colombia, in the Valle del Cauca, 300 miles southwest of Bogotá, to Long Beach when he was 2, and he started making regular trips to see family in South America when he was a teenager.

Smoky meats would still command center stage in his cooking. He installed a fire-breathing hearth, set on display via a window in the bar area, and stacked cords of oak wood out back by the parking lot. The partners opened Selva in February.

The early menu is beautifully streamlined: 10 starters, a handful of entrees, some compelling sides and a few desserts. Before taking your order, servers likely will mention “steak” as a special, with a long list of accompaniments. Quiz them a little, and you’ll learn they’re talking about tray paisa, the one-platter feast synonymous with Colombia. If you are an omnivore, this should be the focal point of your meal.

Steak — skirt or flat-iron, depending on the day — fans out in slices across one edge of the plate, hard-seared and woodsy brown on the surface and rosy inside. Grilled chorizo ​​or morcilla nestles against the beef, along with an extra-crisp hunk of pork belly scored so deeply that its tall squares of meat and fat resemble skyscrapers on a tight city block. Golden lobes of plantain, smoky beans, white rice and one handsomely griddled arepa filled with queso fresco and corn kernels complete the array. A fried egg and sliced ​​avocado lend their comforting presence.

Homemade hot sauce and the wonderfully coarse green chili brighten everything they touch; use them liberally.

Build the rest of your meal around this hearty tour de force. A mellow ceviche of fish (usually snapper) bathed in blood orange leche de tigre tinted with aji amarillo paste is the lightest starter option. It’s hard to resist the fluffy, soy-laced Peruvian-style arroz chaufa; Jury wisely portions the fried rice as an appetizer so it isn’t too filling. It comes with a nightly rotation of meat, often pork belly, so consider the vegetarian version with mushrooms if the meatiness begins to feel like overload. With the main course, I love the tangled, long-simmered mix of cabbage and collard greens as a side.

Beyond the paisa tray, the smoked chicken best frames Jurado’s rigor and skill. He marinates the birds in a citrusy brine, brushes them with garlic confit oil before air-drying them for a couple days, smokes them on the patio and then grills them over oak with splashes of lime juice and dustings of a spice blend heavily perfumed with cumin. The effect is elemental rather than showy: contrasts of crackling skin and lush meat, and a righteous smokiness offset with subtle, sunny accents.

The earthiness of these flavors calls for stouter drinks, and the opening cocktail menu, full of fruit juices and syrups, veered too cloying for my taste. Traditional Colombian spirits are slowly showing up on the bar; try the aguardiente, an anise-flavored liqueur sipped straight like tequila, perhaps with a slice of lime. And since the menu occasionally tips over into Peruvian inspirations, the bartenders are happy to make an excellent pisco sour.

That’s my beverage of choice at dinner as well as at brunch, when I’m wrestling the hot dog or sharing a tray paisa or disappearing into a plate of chorreadas — yucca fries blanketed in queso sauce with bits of smoked pork belly, fried egg and , for a shred of levity, pickled onion.

Noon or night, finish a meal with oblea, a wafer sandwich cookie that is a nostalgic favorite of Jurado’s. The ones he buys from Colombian street stalls are huge and loaded with tropical fruits, whipped cream and jams. At Selva, he makes a miniaturized version streamlined with seasonal berry jam, a condensed-milk caramel in the dulce de leche family called arequipe and a swirl of whipped cream scented with cinnamon. It isn’t too much, and it brings to the meal’s end a sweet context that endures as you make your way home.