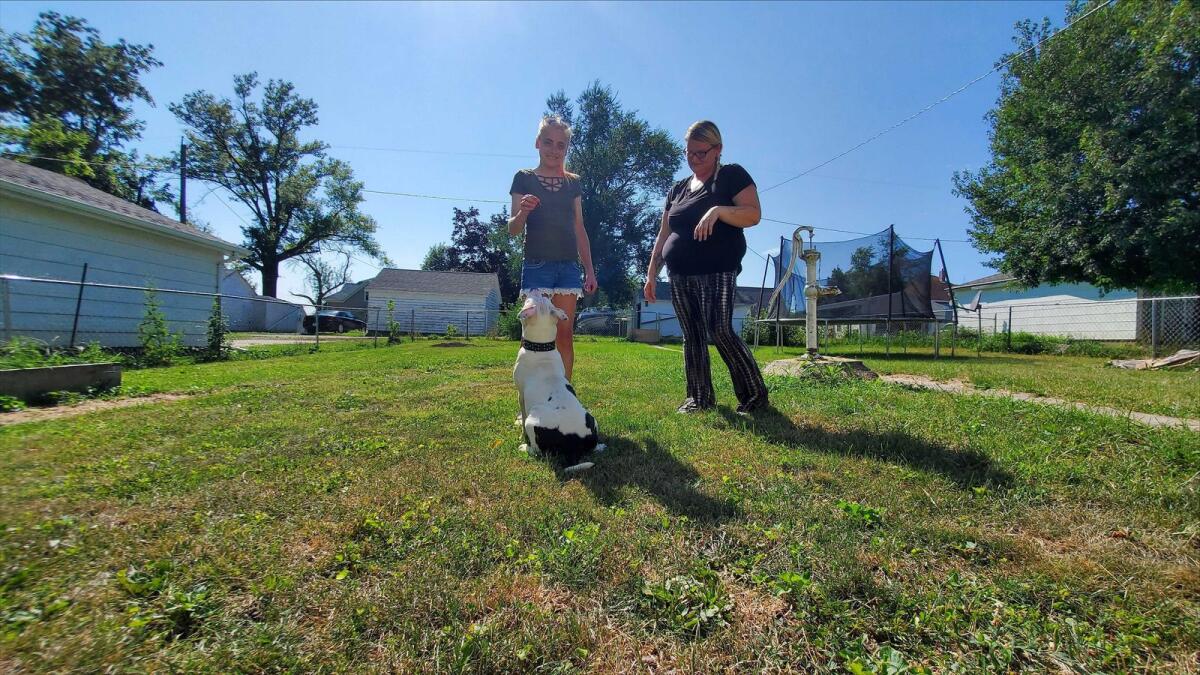 KEYSTONE — Gabby Gormley owns a boxer-labrador mix, but last month was given the same verbal warning from law enforcement as owners of pit bulls: Get rid of it.

Now she and her fiance have been discussing moving out of Keystone because of the warning.

“We are feeling targeted and harassed,” Gormley told the Keystone City Council. “This is an overreach into citizens’ lives. No Iowan should have to live in fear that someone will show up to their house and tell them to get rid of their dogs.”

Like Gormley, dog owners and supporters showed up Thursday night to the Keystone City Council to plead for the ability to keep the family pets despite an ordinance banning pit bills.

Last month, owners of pit bulls in this small Benton County town were given verbal warning of the ban on the dogs in the city limits. In addition to the city ordinance, Benton County has its own ordinance that prohibits pit bulls but also other dogs that have “the characteristics” of pit bulls.

The warnings came after a 2-year old girl was attacked June 18 by a “stray or abandoned pit bull-style dog” in Keystone. The girl was taken to the hospital, and her father contacted authorities. Law enforcement took the dog to a veterinary clinic in Belle Plaine. But an owner for the dog was never identified and the animal was euthanized.

Residents received verbal warnings about their dogs after a sheriff’s deputy received a list of addresses from the city.

Sheriff Ron Tippett told The Gazette last week that the office did not give any official notices to residents, just a “verbal heads up” reminding them of the ordinance, and there were no plans to remove the dogs even though residents who got the warnings said they were given seven to 10 days to comply.

“We will look at this and discuss it in further detail and it will be on a subsequent agenda,” Maj. Mark Andresen said during the meeting. “After further discussion, we will talk about it and get back to you I guess is all we can do now.”

Des Moines labels pit bulls and similar breeds as “high-risk dogs” and has special requirements. Those include the “high-risk” label when licensing the dog with the city and extra confinement rules for the breeds including not being able to be tied to inanimate objects when outside if not completely fenced in.

Multiple residents asked the Keystone City Council to let them keep their dogs, as well as suspend the current ordinance and replace it with a breed-neutral ordinance.

“These dogs that are being singled out did not hurt anybody or cause any trouble,” speaker Christine Miller said in tears. “I’ve had these pups in my life for two years. They haven’t done anything wrong. I can’t imagine losing my two babies. I’m begging you guys understand these are not mean and vicious dogs. They are my family, my best friends and my companions.”

“These laws are difficult to enforce and they give a false sense of security,” Brecht told the council. “Our families are responsible owners. We are being punished because of an irresponsible person’s decision to not take care of their animal.”

Humane Society State Director Preston Moore offered to help the council write a breed-neutral dangerous animal ordinance, as he has done for other cities including Muscatine.

“The majority of Iowa’s communities and counties in Iowa do not have any breed or appearance-based ordinances or prohibitions, and instead rely on documented animal behaviors when managing dangerous animals. That’s what we advocate for,” Moore said. “And because of our work alongside Iowans of all backgrounds, more people and their elected officials are learning that breed bans don’t make sense and thankfully, breed-specific legislation is on the decline.”

Some state governments have prohibited cities from having ordinances that ban certain dog breeds. including some of Iowa’s neighbors like Illinois, Minnesota and South Dakota.

A proposal to prohibit cities and counties from banning dogs based on their breed, introduced by Republican state Sen. Chris Cournoyer, of LeClaire, received an initial legislative hearing in 2021 but never advanced. Similar bills introduced by minority-party Democrats were never considered.